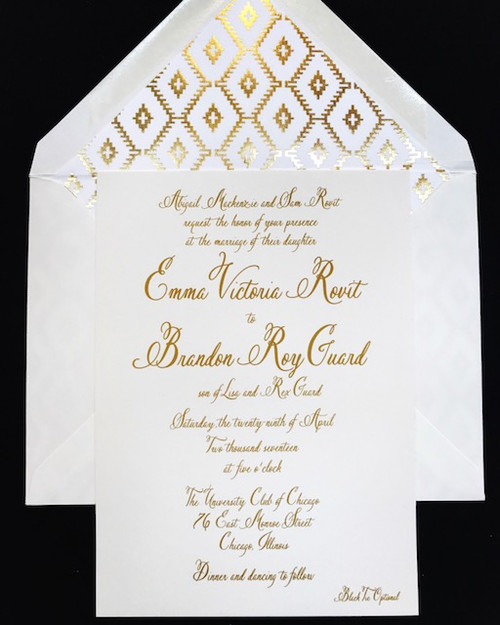 Emma and Brandon were married on April 29th, 2017 at The University Club of Chicago. This couple had a single layer card, digitally printed with a custom design created by NoteworthyNotes.

They wanted to their invitation to have more of a traditional feel. We were able to show that through a beautiful, Handwritten Script font that added an elegance and formality to the entirety of the invite along with a lovely floral detail that is shown on the insert pieces.

Printing in gold ink adds a richness to the invite and is a great neutral which helps express the pops of color in the floral detail. They also wanted to bring in a modern twist as a surprise element. We decided on a Gold Foil, Geometric Pattern Envelope Liner. This gave them the modern twist they were going for, as well as the surpirse element when their guests received and opened the invitations.

Emma and Brandon also asked that we print their Wedding "Day of Items". Shown is their Dinner Menu and their Ceremony Program. To keep everything cohesive, we used the same ink color, fonts and artwork that was shown throughout their invitation suite.